The Friends team are very excited that we’re about to go into the final piece of community consultation before the new playground is built this spring 2022.

The community has been heavily involved in setting the direction for the park and the playground as part of the Master-planning work that happened in 2019. The next step now is for the community to review and comment on the designs that the council’s contractor has come up with. This will happen over January and February.

The council has now published the playground designs on their website.  They are running video sessions later this month to get live feedback from the community:

Use this link to Kingston Council’s >>>>> Playground Consultation Link  where you can review all the plans and leave your comments. These can be added to the council’s ideas board for Manor Park or by completing their online survey. The page you are being linked to has the ideas board and survey at the bottom of the page, and links to the detailed playground plans are at the top of the page.

Please note that the consultation period ends on 18th February 2022.

We are also publishing the high level plans on this website. You will see that there are 3 areas – a new extended toddler playspace, a picnic space outside the hall, and a new junior area with more challenging play equipment including zipwire. The council will also be adding a table tennis table close to the junior play space.

Please note that we are working with the council to ensure that the entire playspace is fenced, as will be a new picnic space between the two play areas outside the hall. The outside gym equipment is staying put, and will be inside the new picnic area. 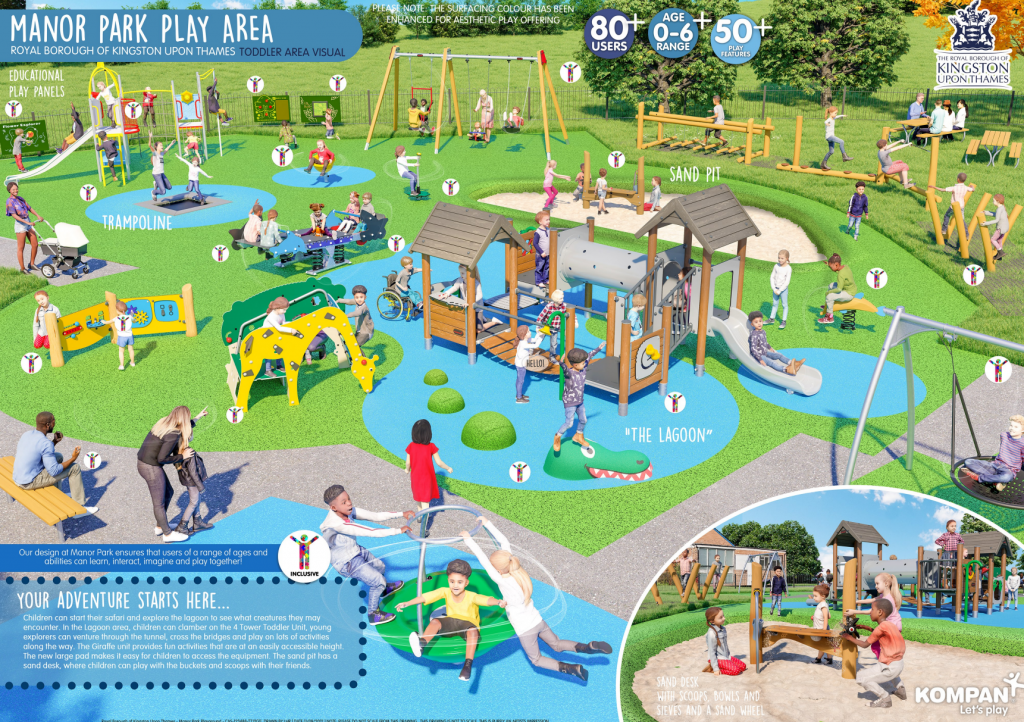 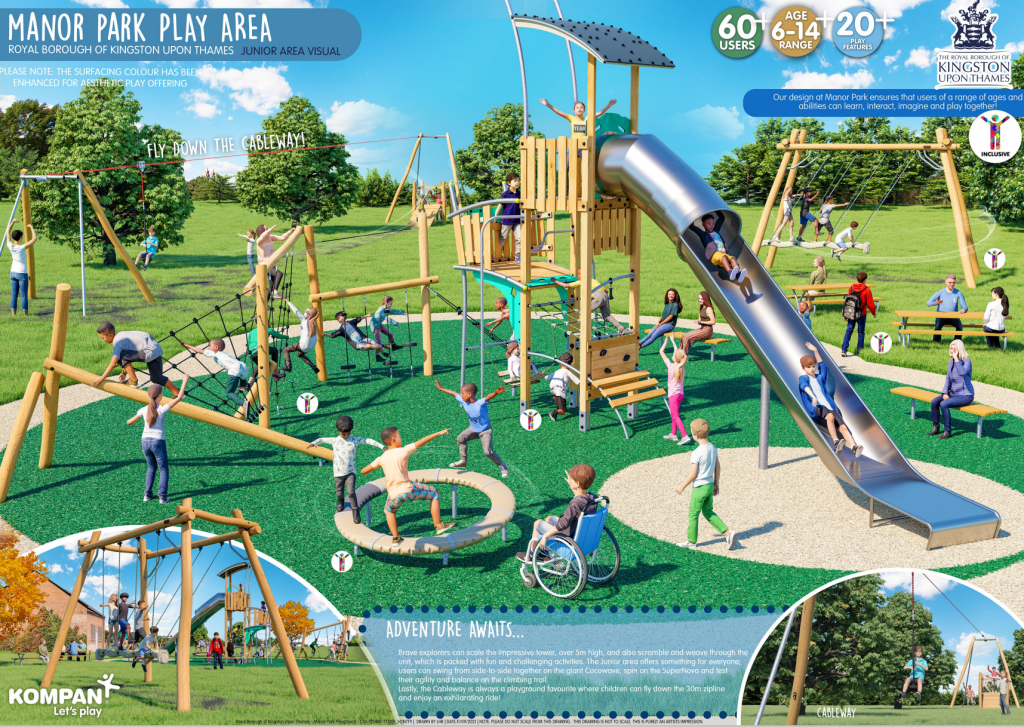 Use this link to Kingston Council’s >>>>> Playground Consultation Link  where you can review all the plans and leave your comments. These can be added to the council’s ideas board for Manor Park or by completing their online survey. The page you are being linked to has the ideas board and survey at the bottom of the page, and links to the detailed playground plans are at the top of the page.

Please note that the consultation period ends on 18th February 2022.

We approached the GLA (Mayor of London) as part of their Crowdfund London programme later that year to see if we could use it to help raise additional funds for our playground. We were advised to take a step back and create a Masterplan for Manor Park. With funding from you the community, our local councillors (both from Old Malden and St. James’ Wards), and the Mayor of London, we employed a team of landscape designers in 2019 to do just this. The community were fantastic, attending workshops, filling in surveys, and providing so much valuable input.

This Masterplan, as well as setting out an overall vision for our park, specifically outlined high-level plans for our new playground, based on a mixture of community input and design expertise from Outerspace, our landscape architects.

The high-level direction set by these community driven plans included:

Overall, the community feedback was for something more inspiring from its playground, less old-fashioned, and less municipal in style. Something uplifting and surprising from a local park. 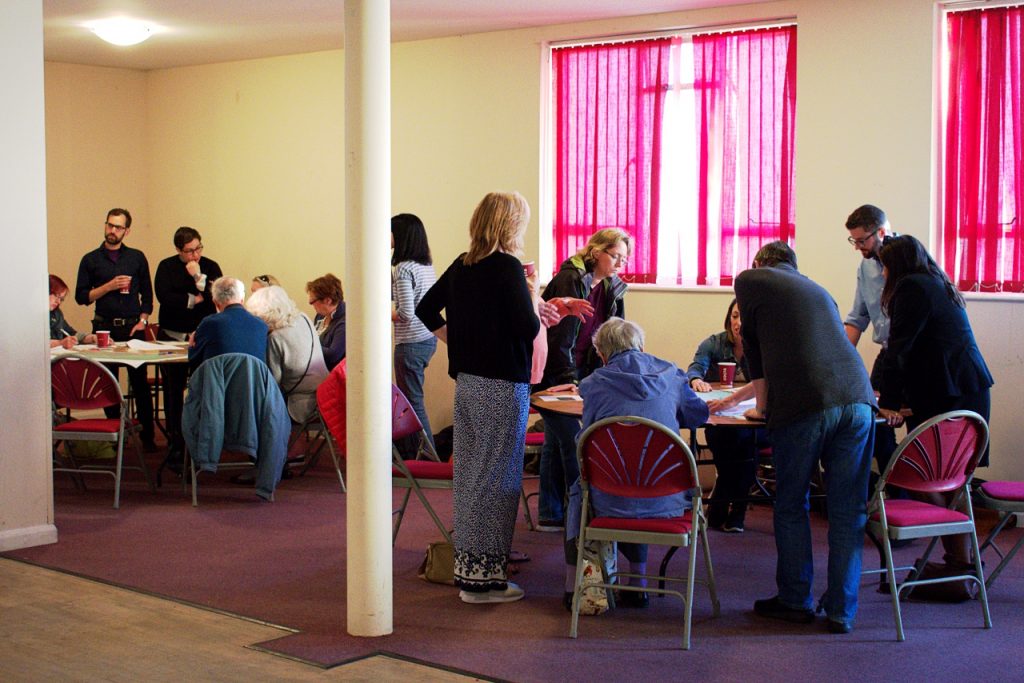 The council was very involved in these Masterplans – in fact they’d recommended the landscape architects we ended up using. The Council then let us know that they’d agreed the funding for our playground. It was £140,000, so we set about trying to arrange extra funding through the Mayor’s Crowdfund London Scheme to help supplement this, as £140,000 doesn’t go that far. Sadly, as COVID struck, this campaign failed to hit target, which meant we weren’t able to access any of the funds pledged, so we had to start again with another crowdfund campaign, where every penny pledged would be accessible for the playground. By the end of July 2020 were in a position to add an additional £10,000 from the community, local councillors and local businesses to the playground fund. (This has risen to £15,000).

The Friends of Manor Park created a parent group to engage with the project, and to adopt the new playground once delivered, helping to develop a parent/child community around our new facility. We also plan to involve the community with the tree planting around the new playground.

We heard that the council had put the playground project out to tender in October 2020, which was good news. We then discovered that the playground specification did not include the new playground location. We were very concerned that the first main deliverable of the Community Masterplan, which is the playground, would not follow the design direction of these plans. This would then have a cascading impact on a number of other deliverables within the Masterplan.

We were very pleased that Cllr Simon Edwards and the Community Team at the Council worked closely with the Community Playground Team to ensure that the new playground will work within the ambitions of the Community Masterplan.

We met with the Community Playground Team at the end of March 2021 with Cllr Simon Edwards. They agreed to support the playground being built as per the masterplans.

Cllr Simon Edwards then decided to seek approval to add £50,000 in additional funds to the project from the Neighbourhood Community Infrastructure Levy. This was approved by the Malden and Coombes Neighbourhood Committee meeting in June. This extra funding will have a very positive impact on the project, so combined with the community money – £15,000, the original council allocation of £140,000, brings the total budget to £205,000.

The playground was put out to tender during summer 2021, and Kompan was selected as the contractor at the end of October. They’ve built a couple of playgrounds in Chessington and are one of the country’s largest playground suppliers.

The Friends team have reviewed the new plans, and we are happy with what we’ve seen. We now look forward to input from the community, which will help sharpen these plans.

If you have any questions, please do email Fiona Sowell, at the Friends of Manor Park Team Team@ourmanorpark.org.uk